Home » Explore » “I can do it myself!” – How to Parent (and Survive) the Independent Toddler Stage

“I can do it myself!” – How to Parent (and Survive) the Independent Toddler Stage

Parenting toddlers through their “I can do it myself!” stage can be tricky. Here are a few ways you can support their independence without losing your mind.

(This post contains affiliate links. If you click on a link and make a purchase, I’ll receive a commission at no extra cost to you.)

“I want my socks off!” my almost-three-year-old cried in desperation as tears began welling up in her eyes.

We’d just come home from preschool and in her desire to do everything “by myself” my daughter insisted she take her shoes and socks off on her own.

But removing her long wool socks was proving to be a challenge and in typical toddler fashion, she let us know (loudly and in a high-pitched tone) just how frustrating it had become.

In an effort to help – and let’s be honest, to squelch the noise – my husband knelt down beside her and took off her socks.

It happened so quickly my daughter could hardly take in what had occurred. But suddenly it dawned on her. With shock and disappointment on her face, she looked up at him and exclaimed: “I want my socks on!!”

After being reliant on their parents for the majority of their young lives, toddlers want more than anything to demonstrate how capable and independent they are.

Often the last thing they desire is for a parent to do something for them. Even when faced with frustration – as was the case with my daughter – the desire to do tasks “by myself” is more powerful.

Parenting toddlers can be challenging – to say the least – especially when they begin to flex their independent muscles, both with the tasks they want to do independently and in their thoughts and feelings.

But don’t despair…although this stage can sometimes be agonizing to go through – with the whining and irrational behavior that comes with it – letting toddlers be more independent helps to build their confidence, self-esteem, and self-worth for the years to come.

Here are a few ways you can support your toddler’s independence while trying to maintain your own sanity:

Be their safe space

Children, and especially babies and toddlers, look to their parents for security and unconditional love.

And no child can feel confident and securely independent without that foundation.

So the essential first step in supporting your toddler’s independence is simply to love them and demonstrate that they can trust you to be supportive.

Kids thrive when they feel this love and trust. It’s these qualities that form the foundation from which emerges a child’s self-reliance and ultimately self-sufficiency later in life.

Just bear in mind the importance of the word unconditional. Whenever our love becomes conditional – based on what we deem to be good behavior or attitude, for example – a little bit of that secure foundation we’ve built up with our kids falls away.

Toddler’s insistence that they do everything on their own can be downright aggravating at times.

But this independence stage can also work in your favor. Your toddlers’ burning desire to demonstrate how capable they are (even if they’re not) provides the perfect opportunity to begin to raise a helper.

It may take all the patience you can muster, but let your toddler try to pour his own milk (this small pitcher can help), fold a few washcloths alongside you, or “wash” (streaks and all) the window looking onto your backyard.

Each time a toddler completes a task, it builds up his or her esteem and confidence. These tasks will rarely be done well, but the point is to develop a culture of helping and let your child see themselves as a helper.

Your reaction to your toddler’s completion of these tasks matters. Criticism and heavy critique will discourage kids and make them less likely to want to help. Praising the effort – even if the task isn’t done well – will increase your toddler’s enthusiasm to help again in the future.

Related: How to Raise Responsible Kids Who Want to Help 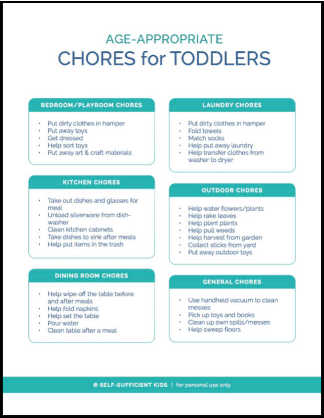 First me, then you

Although you’ll want to avoid criticism and critique, you can delicately coach your toddler about how to complete specific tasks successfully.

A great way to do this is to model for your toddler how something is done.

Explain to your toddler: “first me, then you”, which means: first I’ll do the task and then you can do it.

This phrase allows you to model how something is done and lets your toddler know they’ll eventually have a chance to do it themselves.

You can also use this phrase if your toddler is trying to accomplish something that may take too long for your schedule.

In this case, you could offer to split the job by saying either “first me, then you”, or the reverse: “first you, then me”.

Hopefully, this compromise will preserve your child’s desire for a sense of independence while still moving the day along.

Even though toddlers are often natural helpers, there will inevitably be a time when they will want to do something fun instead of something they need to do.

When this moment arises, it’s a good time to introduce the phrase “first things first”.

It’s a phrase you’ll inevitably use throughout their childhood since there are always more appealing ways to spend one’s time then to do a task one has to do.

In the case of toddlerhood, “first things first” could apply to cleaning up the playroom before going outside, for example.

It sets the expectation that as a family you first complete what you need to and then do what you want to do.

This phrase may not be popular at first but once kids are conditioned to the “first things first” philosophy and realize it’s just a part of family culture, their resistance will likely dim.

You’ll also be glad years later that you began this expectation early before greater distractions and expectations emerge.

While your tiny human begins to develop a greater sense of self and independence, they may be faced with an indecision or two (or three or four).

It can be torturous to sit beside a 4-year-old as she tries to decide what to wear that morning. First, it’s black pants with a purple top. Next, it’s a blue dress with tights. As the clock ticks away, the prospect of leaving the house on time quickly fades.

It’s during these moments that it becomes tempting to simply chose an outfit for your child and force her to put it on.

But even if this was an effective strategy – and every parent of a toddler knows it isn’t – it sends the message that we don’t have faith our child can make decisions on her own.

So what’s a parent to do? The least viable solution is to sit patiently forever as your three-year-old makes up her mind.

A happy medium is to offer your child a choice.

In the example of getting dressed, you can place two outfits on the bed and ask: “Would you like to wear the purple top or the green one? The black pants or denim?” By giving her a choice, she’s still in control of the outcome but with any luck, that outcome will happen faster.

And she’s left with her confidence intact that she made the choice on her own.

Having it both ways

Back to the story of my daughter and her socks:

Yes, she wanted her socks off, and it was frustrating that she couldn’t seem to do it. But the last thing she wanted was for someone else to do it for her.

That’s why immediately after my husband took the socks off her feet she wanted them back on.

Because only then could she take them off herself. (still following?)

So my husband put the socks back on.

“First me and then you?” my husband asked as he motioned towards her socks.

Thankfully, she agreed and with the demonstration of how to get the sock past the heel, she felt more confident about getting one off on her own.

With a little more effort, the second sock came off. And she could respectfully say she did it all by herself.

And everything was right again in the world. Or at least in our home.

Posted Under: Encouraging Self-Sufficiency in Kids, Toddlers and Preschoolers

Sign up to receive one parenting tip each week on how to raise self-sufficient kids.